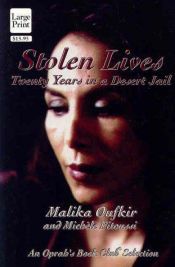 The book contains three major parts:
A description of her early life as the daughter of the powerful General Mohamed Oufkir and adoptive daughter to the Moroccan king Hassan II. She was taken into the palace as a child to be a companion to the king's daughter, Princess Amina. Although she led the life of a princess during these years, she was not one, and she always longed to go home to her real family. She was eventually released for two years to live with her family.
The details of her family's lives in a various desert prisons. While Malika was living with her family, her father was involved in a coup d'etat attempt on the king. Her father was then executed and she and her five siblings, mother, and two maids, were political prisoners for the next twenty years.
A description of the escape of four of the siblings, the house arrest of the entire family in Morocco, and their final escape to freedom.

First They Killed My Father