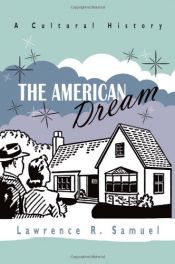 The American Dream: A Cultural History

There is no better way to understand America than by understanding the cultural history of the American Dream. Rather than just a powerful philosophy or ideology, the Dream is thoroughly woven into the fabric of everyday life, playing a vital role in who we are, what we do, and why we do it. No other idea or mythology has as much influence on our individual and collective lives. Tracing the history of the phrase in popular culture, Samuel gives readers a field guide to the evolution of our national identity over the last eighty years.

Samuel tells the story chronologically, revealing that there have been six major eras of the mythology since the phrase was coined in 1931. Relying mainly on period magazines and newspapers as his primary source material, the author demonstrates that journalists serving on the front lines of the scene represent our most valuable resource to recover unfiltered stories of the Dream. The problem, Samuel reveals, is that it does not exist; the Dream is just that, a product of our imagination. That it is not real ultimately turns out to be the most significant finding and what makes the story most compelling.

Centuries Of Childhood: A Social History Of Family …

Tante Jolesch or The Decline of the West in Anecdot …

Sites of memory, sites of mourning : the Great War …

The Hindus: An Alternative History

The Invention of Childhood