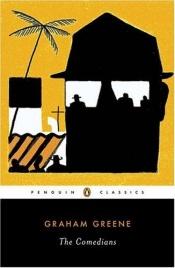 The Comedians is a novel by Graham Greene. Set in Haiti under the rule of François "Papa Doc" Duvalier and his secret police, the Tonton Macoute, the novel explores the political suppression and terrorism through the figure of an English hotel owner, Brown.
The story begins as three men: Brown, Smith, an "innocent" American, and Major H. O. Jones, the confidence man, meet on a ship bound for Haiti. Brown, Smith, and Jones, their names suggesting a curious facelessness, are the “comedians” of Greene’s title. Complications include Brown’s friendship with a rebel leader, politically charged hotel guests, the manipulations of a British arms dealer, and an affair with Martha Pineda, the wife of a South American ambassador. The setting for much of the novel, the Hotel Trianon, was inspired by the Hotel Oloffson in central Port-au-Prince.
The novel was adapted as a feature film of the same name, released in 1967 and starring Richard Burton, Elizabeth Taylor, Alec Guinness, Peter Ustinov, James Earl Jones, Cicely Tyson, Paul Ford and Lillian Gish.