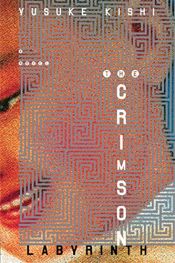 From a rising new star of horror comes a killer read that will make you lose track of time and reality. The Crimson Labyrinth is a wicked satire on extremist reality TV in the tradition of The Running Man-if that indeed is what it is. Welcome to THE MARS LABYRINTH where things aren't what they seem. Welcome to the world of Kishi, where the plot is as gnarly as the humor is twisted.
When an unemployed former math major wakes up one day, he wonders if he's somehow ended up on the red planet. The good-looking young woman with aid-she says her name is Ai and that she draws erotic comics for a living-seems to have no clue either as to their whereabouts. Their only leads are cryptic instructions beamed to a portable device. Has the game begun?
There is no reset button, no saving and no continue-make the wrong move and it's really GAME OVER. In the cruel world of THE MARS LABYRINTH, mercy and compassion are only for the weak or the very, very strong. The stakes are nothing less than your life-and apparently a lot of money.
If you're a fan of Lost or Battle Royale, don't miss this one.

In the Miso Soup