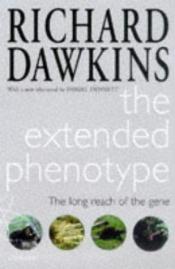 The Extended Phenotype is a 1982 book by Richard Dawkins in which he introduced a biological concept of the same name. The main idea is that phenotype should not be limited to biological processes such as protein biosynthesis or tissue growth, but extended to include all effects that a gene has on its environment, inside or outside of the body of the individual organism.
Dawkins considers The Extended Phenotype to be a sequel to The Selfish Gene aimed at professional biologists, and as his principal contribution to evolutionary theory.