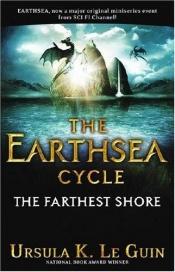 The Farthest Shore is a young-adult fantasy novel by the American author Ursula K. Le Guin, first published by Atheneum in 1972. It is the third book in the series commonly called the Earthsea Cycle. As the next Earthsea novel, Tehanu, would not be released until 1990, The Farthest Shore is sometimes referred to as the final book in the so-called Earthsea trilogy, beginning with A Wizard of Earthsea. The events of The Farthest Shore take place several decades after The Tombs of Atuan and continue the story of the wizard Ged.
The Farthest Shore won the 1973 National Book Award in category Children's Books. Studio Ghibli's animated film Tales from Earthsea was based primarily on this novel.

Across the Nightingale Floor

A Series of Unfortunate Events, Book 3 : The Wide W …