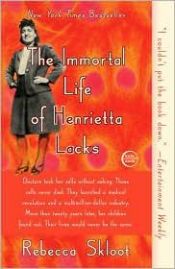 The Immortal Life of Henrietta Lacks

The Immortal Life of Henrietta Lacks is a non-fiction book by American author Rebecca Skloot. It is about Henrietta Lacks and the immortal cell line, known as HeLa, that came from her cervical cancer cells in 1951. The book is notable for its science writing and dealing with ethical issues of race and class in medical research. Rebecca Skloot writes in her book that some of the information was taken from the journal of Deborah Lacks, Henrietta Lacks's daughter, as well as from "archival photos and documents, scientific and historical research". It is Skloot's first book.
In May 2010, it was announced that Oprah Winfrey and Alan Ball in conjunction with HBO plan to create a film version.

In the Garden of Beasts

The Worst Hard Time: The Untold Story of Those Who …

The Year of Living Biblically