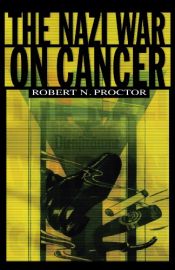 The Nazi War on Cancer

Familiar as we are with the horrific history of Nazi medicine and science, it may come as a surprise to learn that the Nazi war against cancer was the most aggressive in the world. Robert N. Proctor's thought-provoking book, The Nazi War on Cancer recounts this little-known story. The Nazis were very concerned about protecting the health of the "Volk." Cancer was seen as a growing threat--and perhaps even held a special place in Adolf Hitler's imagination (his mother, Klara, died from breast cancer in 1907). The Nazi doctors fought their war against cancer on many fronts, battling environmental and workplace hazards (restrictions on the use of asbestos) and recommending food standards (bans on carcinogenic pesticides and food dyes) and early detection ("men were advised to get their colons checked as often as they would check the engines of their cars..."). Armed with the world's most sophisticated tobacco-disease epidemiology--they were the first to link smoking to lung cancer definitively--Nazi doctors were especially passionate about the hazards of tobacco. Hitler himself was a devout nonsmoker, and credited his political success to kicking the habit. Proctor does an excellent job of charting these anticancer efforts--part of what he terms "the 'flip side' of fascism"--and, along the way, touches on some unsettling issues. Can an immoral regime promote and produce morally responsible science? Or, in Proctor's words, "Do we look at history differently when we learn that ... Nazi health officials worried about asbestos-induced lung cancer? I think we do. We learn that Nazism was a more subtle phenomenon than we commonly imagine, more seductive, more plausible."

Proctor is no apologist--one of his earlier books, Racial Hygiene is a scathing account of Nazi atrocities--but he clearly wants to engage in the complex moral discussions surrounding the fascist production of science and Holocaust studies. Proctor's thorough research, excellent examples, and dozens of illustrations are complemented by his authoritative prose. The Nazi War on Cancer is a fine addition to the literature on both the Holocaust and the history of medicine. --C.B. Delaney

Six Modern Plagues and How We Are Causing Them

Being Mortal: Medicine and What Matters in the End

Hermaphrodites and the medical invention of sex

The aWAKE project : uniting against the African AID …