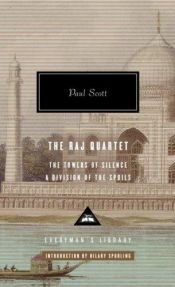 The Raj Quartet: The Towers of Silence, A Division of the Spoils

The Raj Quartet, Paul Scott's epic study of British India in its final years, has no equal. Tolstoyan in scope and Proustian in detail but completely individual in effect, it records the encounter between East and West through the experiences of a dozen people caught up in the upheavals of the Second World War and the growing campaign for Indian independence from Britain.

In The Towers of Silence, Barbie Batchelor, a British missionary and schoolteacher, befriends a British family and witnesses the trial of Hari Kumar, an Indian man accused of assaulting his beloved Daphne Manners, while observing the dangerously cruel Captain Ronald Merrick, Hari’s nemesis. In A Division of the Spoils, the chaos of the departure of the British and the fervor of Partition wreaks havoc upon the twilight of the Raj — and the end of a era.

On occasions unsparing in its study of personal dramas and racial differences, the Raj Quartet is at all times profoundly humane, not least in the author’s capacity to identify with a huge range of characters. It is also illuminated by delicate social comedy and wonderful evocations of the Indian scene, all narrated in luminous prose.

The other two novels in the Raj Quartet, The Jewel in the Crown and The Day of the Scorpion, are also available from Everyman’s Library. With a new introduction by Hilary Spurling

The Mistress of Abha

Death and the Dervish (Writings from an unbound Eur …

Crossed Bones (Tenth Gift in the US)

A Glass of Blessings

The Song Before It Is Sung