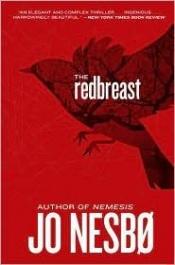 The Redbreast is a crime novel by Norwegian writer Jo Nesbø, the third in the Harry Hole series.
The novel begins during former President Clinton's visit to Norway, where Harry reluctantly ends up playing an important role. Ramifications of the mission Harry is tasked with lead to him investigating neo-Nazi activity in Norway, and delving into a crime that has its roots in the battlefields of Eastern Front WWII.
A large part of the book is laid at the time of the Second World War – specifically, the Siege of Leningrad, wartime Vienna and the Bombing of Hamburg – making The Redbreast a war novel as well as a crime novel. The book touches deeply on the still highly sensitive issue of Norwegian Collaboration with the Nazis and specifically the voluntary recruitment of Norwegians to the Waffen SS.
The novel was voted Best Norwegian Crime Novel ever. Upon translation into English, by Don Bartlett, the novel was shortlisted for the Crime Writers' Association Duncan Lawrie International Dagger.

The Track of Sand