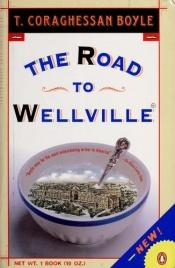 The Road to Wellville

The Road to Wellville is a 1993 novel by American author T. Coraghessan Boyle. Set in Battle Creek, Michigan during the early days of breakfast cereals, the story includes a historical fictionalization of John Harvey Kellogg, the inventor of corn flakes.
The title comes from an actual booklet called The Road to Wellville written by C. W. Post, a former patient at the sanitarium who was inspired by his diet there to found his own cereal business. Post used to give out his booklet in boxes of Grape-Nuts cereal. In the novel, the character Will Lightbody brings up this phrase and incurs Kellogg's wrath.
The Road to Wellville was adapted into a movie in 1994, directed by Alan Parker and starring Anthony Hopkins, Bridget Fonda, Matthew Broderick, John Cusack, Michael Lerner, Dana Carvey, Lara Flynn Boyle, John Neville, Colm Meaney, Camryn Manheim, and Monica Parker. The northeast US scenes were primarily filmed at Mohonk Mountain House, an historic stick-frame hotel in New Paltz, New York.