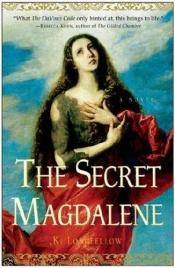 The Secret Magdalene, American Ki Longfellow's third book, was published in 2005. The historical novel challenges the traditional view of events chronicled in the New Testament, specifically the ministry of Jesus Christ and his relationship to Mary Magdalene. It is told entirely in the first-person voice of Mariamne.
A hardback edition was published by Random House in 2006, followed by a trade paperback edition published by Three Rivers Press, a Random House imprint, in December 2007. It has been translated into several languages, including Spanish, Czech, Chinese, French and Icelandic.), this is a tale of Mariamne's quest to understand the gnosis she experienced as a child.
Longfellow said she based the book on her studies of translations of historic Jewish and Arabic texts, as well as on modern Biblical scholarship. A selected bibliography is included.

The Gods of War

The Field of Swords

The Gates of Rome

The Death of Kings

The Land of Painted Caves