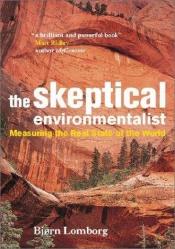 The Skeptical Environmentalist: Measuring the Real State of the World

The Skeptical Environmentalist: Measuring the Real State of the World is a book by Danish environmentalist author Bjørn Lomborg, controversial for its claims that overpopulation, declining energy resources, deforestation, species loss, water shortages, certain aspects of global warming, and an assortment of other global environmental issues are unsupported by analysis of the relevant data. It was first published in Danish in 1998, while the English edition was published as a work in environmental economics by Cambridge University Press in 2001.
Due to the scope of the project, comprising the range of topics addressed, the diversity of data and sources employed, and the many types of conclusions and comments advanced, The Skeptical Environmentalist does not fit easily into a particular scientific discipline or methodology. Although published by the social sciences division of Cambridge University Press, the findings and conclusions were widely challenged on the basis of natural science. This interpretation of The Skeptical Environmentalist as a work of environmental science generated much of the controversy and debate that surrounded the book.

Origins: The Evolution of Continents, Oceans and Li …

The Ecological Indian: Myth and History

Engines of Creation: the Coming Era of Nanotechnolo …