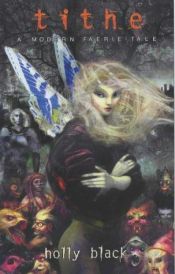 Tithe: A Modern Faerie Tale is a young-adult fantasy novel written by Holly Black. It was published in 2002 by Simon & Schuster, who recommended it for "ages 12 up". Sequels-- Valiant and Ironside--completed a trilogy that is sometimes called [A] Modern Tale of Faerie, the subtitle of volume two.
The novel is set on the Jersey Shore and Black calls it "suburban fantasy, as opposed to urban fantasy".
Tithe was one of five finalists for the annual Mythopoeic Fantasy Award in children's literature.