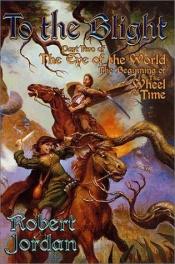 To The Blight : Part Two of 'The Eye of the World', The Beginning of 'The Wheel of Time' (Wheel of Time (Starscape)

“Jordan has come to dominate the world that Tolkien began to reveal.” —The New York Times

Pursued by Trollocs and Myrddraal, Rand and his friends find refuge in the deserted city of Shadar Logoth. But their wandering—and the many dangers they face—are far from over. For from the lips of a dying Aiel girl they learn that the Dark One means to blind the Eye of the World. Having barely escaped capture and death, Rand finds himself face to face with Aginor: a wielder of the One Power and an ally of the Dark One.

In the battle that follows, Rand will discover his true identity...and destiny.

“The most ambitious American fantasy saga [may] also be the finest. Rich in detail and his plot is rich in incident. Impressive work, and highly recommended.”—Booklist

“Recalls the work of Tolkien.”—Publishers Weekly

The Enchantress of Florence

Flashman in the Great Game