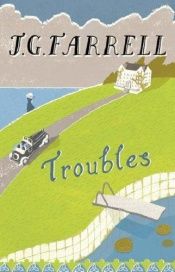 Troubles is a 1970 novel by J. G. Farrell. The plot concerns the dilapidation of a once grand Irish hotel, in the midst of the political upheaval during the Irish War of Independence. It is the first instalment in Farrell's acclaimed 'Empire Trilogy', preceding The Siege of Krishnapur and The Singapore Grip. Although there are similar themes within the three novels, they do not form a sequence of storytelling.
Troubles was well-received upon its publication. It won the Geoffrey Faber Memorial Prize and, later, the Lost Man Booker Prize. It was adapted into a made-for-television film in 1988, starring Ian Charleson and Ian Richardson.
In 2010, Sam Jordison in The Guardian called Troubles "a work of genius", and "one of the best books" of the second half of the twentieth century. "Had [Farrell] not sadly died so young,” Salman Rushdie said in 2008, "there is no question that he would today be one of the really major novelists of the English language. The three novels that he did leave are all in their different way extraordinary."

Round Ireland with a fridge