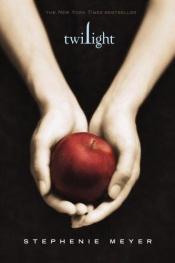 "Softly he brushed my cheek, then held my face between his marble hands. 'Be very still,' he whispered, as if I wasn't already frozen. Slowly, never moving his eyes from mine, he leaned toward me. Then abruptly, but very gently, he rested his cold cheek against the hollow at the base of my throat."

As Shakespeare knew, love burns high when thwarted by obstacles. In Twilight, an exquisite fantasy by Stephenie Meyer, readers discover a pair of lovers who are supremely star-crossed. Bella adores beautiful Edward, and he returns her love. But Edward is having a hard time controlling the blood lust she arouses in him, because--he's a vampire. At any moment, the intensity of their passion could drive him to kill her, and he agonizes over the danger. But, Bella would rather be dead than part from Edward, so she risks her life to stay near him, and the novel burns with the erotic tension of their dangerous and necessarily chaste relationship.

Meyer has achieved quite a feat by making this scenario completely human and believable. She begins with a familiar YA premise (the new kid in school), and lulls us into thinking this will be just another realistic young adult novel. Bella has come to the small town of Forks on the gloomy Olympic Peninsula to be with her father. At school, she wonders about a group of five remarkably beautiful teens, who sit together in the cafeteria but never eat. As she grows to know, and then love, Edward, she learns their secret. They are all rescued vampires, part of a family headed by saintly Carlisle, who has inspired them to renounce human prey. For Edward's sake they welcome Bella, but when a roving group of tracker vampires fixates on her, the family is drawn into a desperate pursuit to protect the fragile human in their midst. The precision and delicacy of Meyer's writing lifts this wonderful novel beyond the limitations of the horror genre to a place among the best of YA fiction. (Ages 12 and up) --Patty Campbell

Q: Were you a fan of Buffy the Vampire Slayer? Angel? What are you watching now that those shows are off the air?
A: I have never seen an entire episode of Buffy or Angel. While I was writing Twilight, I let my older sister read along chapter by chapter. She's a huge Buffy fan and she kept trying to get me to watch, but I was afraid it would mess up my vision of the vampire world so I never did.

I don't have a ton of time for TV, and my kids get rowdy when I have on "mommy shows," but I do have a secret fondness for reality shows (the good ones, at least in my opinion). I always TiVo Survivor, The Amazing Race, and America's Next Top Model.

Q: What inspired you to write Twilight? Is this the beginning of a series? Why write for teens?
A: Twilight was inspired by a very vivid dream, which is fairly faithfully transcribed as chapter thirteen of the book. There are sequels on the way--I'm hard at work editing book two (tentatively titled New Moon) right now, and book three is waiting in line for its turn.
I didn't mean to write for teens--I didn't mean to write for anyone but myself, so I had an audience of one twenty-nine year old (and later one thirty-one year old when my sister started reading). I think the reason that I ended up with a book for teens is because high school is such a compelling time period--it gives you some of your worst scars and some of your most exhilarating memories. It's a fascinating place: old enough to feel truly adult, old enough to make decisions that affect the rest of your life, old enough to fall in love, yet, at the same time too young (in most cases) to be free to make a lot of those decisions without someone else's approval. There's a lot of scope for a novel in that.

Q: What is your favorite vampire story? Fave vampire movie?
A: I guess my favorite vampire story would be The Vampire Lestat, by Anne Rice, simply because it's one of the only ones I've ever read. I keep meaning to pick up Bram Stoker's Dracula, because I get asked this question so often and I should probably start with the classics, but I haven't gotten around to it yet. Again, I'm afraid to read other vampire books now, for fear of finding things either too similar, or too different from my own vampire world.

Ack! I can't even answer the movie question. I can't remember ever seeing a single vampire movie, outside of clips from Bela Lugosi movies on TV. I don't like true horror movies--my favorite scary movies are all Hitchcock's.

Q: What other young adult authors do you read?
A: My favorite young adult author is L.M. Montgomery I also enjoy J.K. Rowling (but who doesn't?), and Ann Brashares. As a teen, I skipped straight to adult books (lots of sci-fi and Jane Austen), so I'm rediscovering the world of teen literature now.

Q: You are stranded on a desert island with only one book, one CD, and one DVD--what are they?
A: The CD is easy: Absolution by Muse, hands down. It's harder to give myself just one movie, but the one I watch most frequently is Sense and Sensibility--the one with the screenplay by Emma Thompson. One book is impossible. I'd have to have Pride and Prejudice, but I couldn't live without something by Orson Scott Card and a nice, thick Maeve Binchy, too.

Q: What is the worst lie you've ever told?
A: My lies are all very, very boring: "No, you really look great in hot pink!" "My children only watch one hour of TV a day." "I didn't eat the last Swiss Cake Roll--it must have been one of the kids." That's the best I've got.

Q: Describe the perfect writing environment.
A: It's late at night and the house is silent, but I'm still (miraculously) full of energy. I have my headphones in and I'm listened to a mix of Muse, Coldplay, Travis, My Chemical Romance, and The All-American Rejects. Beside me is a fabulous, and yet mysteriously low in calorie, cheesecake....

Q: If you could write your own epitaph, what would it say?
A: I'd like it to say that I really tried at the important things. I was never perfect at any of them, but I honestly tried to be a great mom, a loving wife, a good daughter, and a true friend. Under that, I'd want a list of my favorite Simpsons quotes.

Q: Who is the one person living or dead that you would like to have dinner with?
A: I'd love to have a chance to talk to Orson Scott Card--I have a million questions for him. Mostly things like, "How do you come up with this stuff?!" But, if he wasn't available, I'd settle for Matthew Bellamy (lead singer of Muse).

Q: If you could have one superpower, what would it be?
A: I'd want something offensive, rather than defensive. Like shooting fireballs from my hands. That way, you're really open to going either way--hero or villain. I like to have choices.

Perhaps I'm retarded. Or a troll. Or Stephanie Meyer can actually write well and create relatable characters and dialogue and has the fantasy scene on lock down within the subsection of romance writing. Perhaps this book came at the right place and right time, or I just want Zach W. to believe so. :P