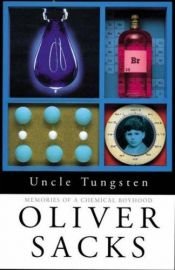 Uncle Tungsten: Memories of a Chemical Boyhood is a memoir by Oliver Sacks about his childhood published in 2001. The book is named for Sacks's Uncle Dave, owner of a business named Tungstalite, which made incandescent lightbulbs with a tungsten filament, whom Oliver nicknamed Uncle Tungsten. Uncle Tungsten was fascinated with tungsten and believed it was the metal of the future.
It is an extremely readable primer in the history and science of chemistry. However, it is not all about his youthful passion for chemistry, but also is eclectic, relating his memories of the catastrophic fire at the Crystal Palace, his terrible experiences of sadism at school, his interest in amateur chemistry, and a passing obsession with coloring his own black-and-white photographs in his home laboratory.

My Family and Other Animals