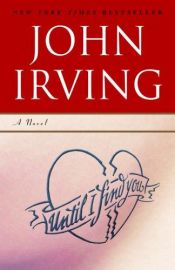 Until I Find You

Until I Find You is the 11th published novel by John Irving. The novel was originally written in first person and only changed 10 months before publication. After realizing that so much of the material—childhood sexual abuse and a long-lost father who eventually ends up in a mental institution—was too close to his own experiences, Irving postponed publication of the novel while he rewrote it entirely in third person.
The cover is a close-up photo/illustration of the side of a woman's breast, with a tattoo on it. The American publisher requested their version be a very close shot of the side of the breast, so the body part in question wouldn't be readily identifiable, and therefore would not offend readers or passersby in the bookstore. The Canadian dust jacket features a close-up that is more readily identifiable as the side of a woman's breast.

The Lay of the Land