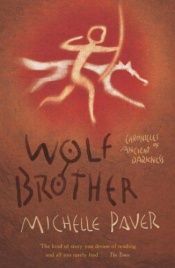 Wolf Brother is the first book in the series Chronicles of Ancient Darkness by Michelle Paver. Wolf Brother takes place 6000 years ago during the New Stone Age, and tells the story of twelve-year-old Torak, a boy of the Wolf Clan.
The book was published in 2004 by Orion Children's Books.
Most reviews were very favourable, commenting on Paver's imagination, humour, and descriptive writing style. Most commentators praised the author's attention to detail and depth of research. Paver travelled to the forests of Finland researching how people lived 6000 years ago, and she also spent time with wolves at a wolf reserve. She also studied the raven population at the Tower of London. Wolf Brother is illustrated by Geoff Taylor.
"Six thousand years ago, Evil stalks the land. According to legend, only twelve-year-old Torak and his wolf-cub companion can defeat it. Their journey together takes them through deep forests, across giant glaciers, and into dangers they never imagined. Torak and Wolf are terrified of their mission. But if they do not battle to save their world, who will?" — Wolf Brother

Gregor and the Prophecy of Bane

The Ruins of Gorlan