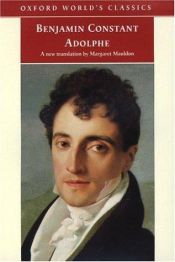 Adolphe is a classic French novel by Benjamin Constant, first published in 1816. It tells the story of an alienated young man, Adolphe, who falls in love with an older woman, Ellénore, the Polish mistress of the Comte de P***. Their illicit relationship serves to isolate them from their friends and from society at large. The book eschews all conventional descriptions of exteriors for the sake of detailed accounts of feelings and states of mind.
Constant began the novel on 30 October 1806, and completed it some time before 1810. While still working on it he read drafts to individual acquaintances and to small audiences, and after its first publication in London and Paris in June 1816 it went through three further editions: in July 1816, July 1824 in Paris, and in 1828. Many variants appear, mostly alterations to Constant's somewhat archaic spelling and punctuation.