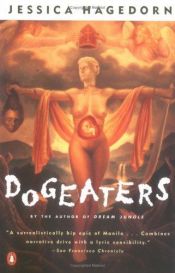 Dogeaters is a novel written by Jessica Hagedorn and published in 1990. Hagedorn also adapted her novel into a play by the same name. Dogeaters, set in the late 1950s in Manila, addresses several social, political and cultural issues present in the Philippines during the 1950s.
The title is a common derogatory term referring to Filipino natives who supposedly eat dogs instead of pork or chicken. The term reflects attitudes within Filipino culture and attempts to become more westernized.