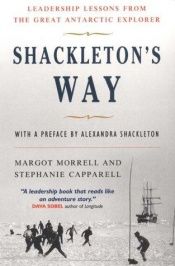 Sir Ernest Shackleton has been called "the greatest leader that ever came on God's earth, bar none" for saving the lives of the twenty-seven men stranded with him in the Antarctic for almost two years. Because of his courageous actions, he remains to this day a model for great leadership and masterful crisis management. Now, through anecdotes, the diaries of the men in his crew, and Shackleton's own writing, Shackleton's leadership style and time-honored principles are translated for the modern business world. Written by two veteran business observers and illustrated with ship photographer Frank Hurley's masterpieces and other rarely seen photos, this practical book helps today's leaders follow Shackleton's triumphant example.

"An important addition to any leader's library." -Seattle Times

Throwing the Elephant: Zen and the Art of Managing …