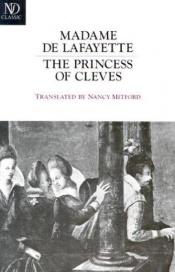 La Princesse de Clèves is a French novel which was published anonymously in March 1678. It is regarded by many as the beginning of the modern tradition of the psychological novel, and as a great classic work. Its author is generally held to be Madame de La Fayette.
The action takes place between October 1558 and November 1559 at the royal court of Henry II of France. The novel recreates that era with remarkable precision. Nearly every character – except the heroine – is a historical figure. Events and intrigues unfold with great faithfulness to documentary record.