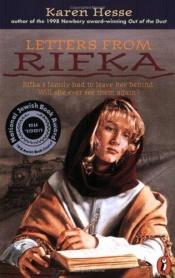 Letters From Rifka is a children's historical novel by Karen Hesse, published by Holt in 1992. It features a Jewish family's emigration from Russia in 1919, to Belgium and ultimately to the U.S., from the perspective of daughter Rifka, based on the personal account by Hesse's great-aunt Lucille Avrutin.
Hesse and Letters won the 2012 Phoenix Award from the Children's Literature Association, recognizing the best children's book published twenty years earlier that did not win a major award. Among contemporary honors it won the 1993 National Jewish Book Award in category Children's Literature.
The protagonist's name, Rifka, is the East European Jewish version of Rebecca.

The True Confessions of Charlotte Doyle