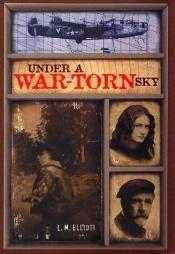 Under a War-Torn Sky

Under a War-Torn Sky is a young adult war novel about a young man flying a B-24 in World War II. When his plane is shot down and he is trapped behind enemy lines, he is helped by kind French citizens to escape and get back to his home. Written by American author L.M. Elliott, the novel was first published in 2001. It won a number of awards on publication and has sold over 200,000 copies in the U.S. and abroad.
Elliott drew inspiration for the novel from her father, who served in World War II. He was a bomber pilot in real life and was shot down behind enemy lines, much like the main character in the novel.
The sequel to this novel, A Troubled Peace, came out in August, 2009.
General information on the author and specific information for students, teachers, and media center specialists can be found on the author's website.

Soldier's Heart : Being the Story of the Enlistment …

Postcards from No Man's Land