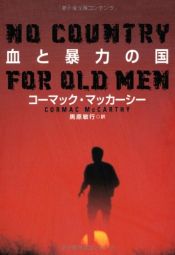 No Country for Old Men [In Japanese Language]

One for the Money (Stephanie Plum, No. 1)