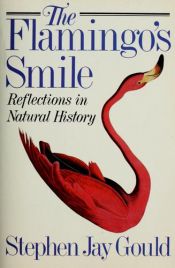 The Flamingo's Smile: Reflections in Natural History, published in 1985, is the fourth volume of collected essays from evolutionary biologist and well-known science writer Stephen Jay Gould; the essays were culled from his monthly column The View of Life in Natural History magazine, to which Gould contributed for more than two decades. The book deals, in typically discursive fashion, with themes familiar to Gould's writing: evolution and its teaching, science biography, probabilities and common sense.
The title essay, "The Flamingo's Smile", discusses changes in morphology arising as a consequence of behaviour, as illustrated by the beak and tongue of the flamingo. Topics discussed in other essays include SETI, the extinction of the dinosaurs, and the importance of taxonomy.

An Urchin in the Storm: Essays About Books and Idea …