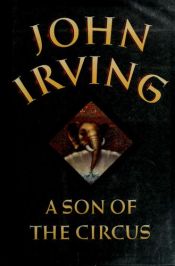 A Son of the Circus

Born a Parsi in Bombay, sent to university and medical school in Vienna, Dr. Farrokh Daruwalla is a 59-year-old orthopedic surgeon and a Canadian citizen who lives in Toronto. Periodically, the doctor returns to Bombay, where most of his patients are crippled children. Once, 20 years ago, Dr. Daruwalla was the examining physician of two murder victims in Goa. Now, 20 years later, he will be reacquainted with the murderer.
Dr. Farrokh Daruwalla, reared in Bombay, educated in Vienna, and long a resident of Toronto, is a 59-year-old without a country, culture, or religion to call his own. . . Irving's imagined India, which Daruwalla visits periodically . . . [is] a land of energetic colliding egos, of modern media clashing with ancient cultures, of broken sexual boundaries.-- New York Newsday.