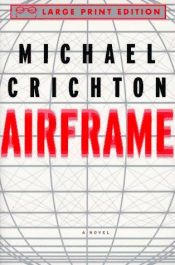 Airframe is a novel by American writer Michael Crichton, first published in hardcover in 1996 by Knopf and as a paperback in 1997 by Ballantine Books. The plot follows Casey Singleton, a quality assurance vice-president at the fictional aerospace manufacturer Norton Aircraft, as she investigates an in-flight accident aboard a Norton-manufactured airliner that leaves three passengers dead and fifty-six injured.
Airframe remains one of Crichton's few novels to be unadapted to film. Crichton stated this to be due to the great expenses needed to make such a film.