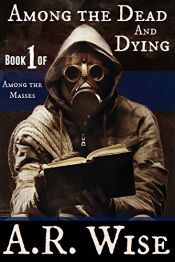 Among the Dead and Dying (Among the Masses Book 1)

Game of Thrones meets The Walking Dead in this post-apocalyptic zombie series.

Thousands of years after a zombie apocalypse wiped out the majority of humans, the world is a very different and harsh place. It's safest to live behind the fortified walls of the Kingdom of Golden Rock, or it least it had been. Rumors of an army of dead led by a man calling himself The Scholar have proven true, and even the most secure cities are no match for his undead soldiers. The Scholar's goal is to crush the world of the living, but he also wants to capture a simple baker named Saffi, though no one seems to know why.
Saffi's father vows to protect his daughter, and flees The Scholar's path, only to fall prey to other evils of the world outside the walls. In just one day's time, Ward and Saffi's lives will be forever altered, and the secret about why The Scholar wants her will be revealed.