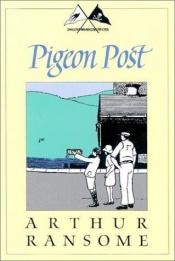 Pigeon Post is an English children's adventure novel by Arthur Ransome, published by Jonathan Cape in 1936. It was the sixth of twelve books Ransome completed in the Swallows and Amazons series. He won the inaugural Carnegie Medal from the Library Association, recognising it as the year's best children's book by a British subject.
This book is one of the few Swallows and Amazons books that does not feature sailing. All the action takes place on and under the fells surrounding the Lake, as the characters attempt to discover precious metals in the Lake District hills.