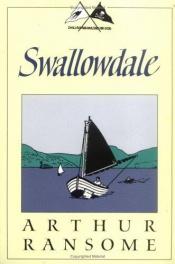 Swallowdale is the second book in the Swallows and Amazons series by Arthur Ransome. It was published in 1931. In this book, camping in the hills and moorland country around Ransome's Lake in the North features much more prominently and there is less sailing. A significant new character, Maria Turner, the Blacketts' Great Aunt, is introduced.
Ransome was living in the Lake District and he drew on his experiences and memories of encounters over many years with the local farming community. Ransome had often climbed Old Man of Coniston and in the book, this becomes the children's Kanchenjunga. Expeditions to Kanchenjunga in the Himalayas had been much in the news while Ransome was writing the book.