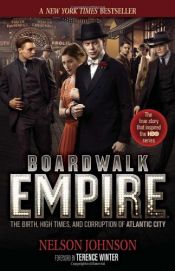 Providing the inspiration and source material for the upcoming HBO series produced by Academy Award-winning director Martin Scorsese and Emmy Award-winning screenwriter Terence Winter, this riveting and wide-reaching history explores the sordid past of Atlantic Cityforever a freewheeling town long-dedicated to the fast buckfrom the city's heyday as a Prohibition-era mecca of lawlessness to its rebirth as a legitimate casino resort in the modern era. A colorful cast of powerful characters, led by Commodoreâ KuehnleÂ and Nuckyâ Johnson, populates this stranger-than-fiction account of corrupt politics and the toxic power structure that grew out of guile, finesse, and extortion. Atlantic City's shadowy pastthrough its rise, fall, and rebirthis given new light in this revealing, and often appalling, study of legislative abuse and organized crime.

The Day of the Owl