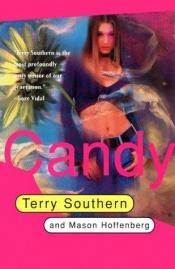 Candy is a 1958 novel written by Maxwell Kenton, the pseudonym of Terry Southern and Mason Hoffenberg, who wrote the book in collaboration for the "dirty book" publisher Olympia Press, which published the novel as part of its "Traveller's Companion" series. According to Hoffenberg,
Terry Southern and I wrote Candy for the money. Olympia Press, $500 flat. He was in Switzerland, I was in Paris. We did it in letters. But when it got to be a big deal in the States, everybody was taking it seriously. Do you remember what kind of shit people were saying? One guy wrote a review about how Candy was a satire on Candide. So right away I went back and reread Voltaire to see if he was right. That's what happens to you. It's as if you vomit in the gutter and everybody starts saying it's the greatest new art form, so you go back to see it, and, by God, you have to agree.
Southern had a different take on the novel's genesis, claiming it was based on a short story he had written about a girl living in New York's Greenwich Village neighborhood, a Good Samaritan-type, who became involved with a hunchback.

The Castle in the Forest