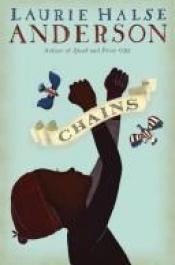 Chains is the first novel in the Seeds of America trilogy, a series of historical novel that follows the story of thirteen-year-old Isabel, an African-American slave fighting for her and her younger sister's freedom while the Revolutionary War is occurring. The story sets in New York in the years 1776 to 1777, when slavery was something that was legal and common in the colonies.
Though the novel is fictional, the events in the story are actual events that occurred back then in the colonies. Some examples of these events are the failed plan of George Washington's assassination followed by the hanging of one of the conspirators, the capture of Fort Washington, and the popular pamphlet Common Sense by Thomas Paine.
The novel contains 45 chapters with the chapter numbers in Roman Numerals and the dates of the events in the chapter written right under the chapter number. Under the dates, Anderson has put in quotes from important documents at the time such as private letters, newspapers, the Common Sense pamphlet, the Declaration of Independence of the United States, and even spoken opinions from various country leaders.