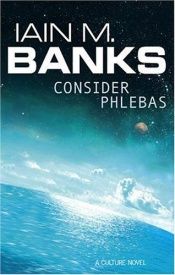 Consider Phlebas, first published in 1987, is a space opera novel by Scottish writer Iain M. Banks. Written after a 1984 draft, it is the first to feature the Culture.
The novel revolves around the Idiran-Culture War, and Banks plays on that theme by presenting various microcosms of that conflict. Its protagonist Bora Horza Gobuchul is actually an enemy of the Culture.
Consider Phlebas is Banks's first published science fiction novel set in the Culture, and takes its title from a line in T. S. Eliot's poem The Waste Land. A subsequent Culture novel, Look to Windward, whose title comes from the previous line of the same poem, can be considered a loose follow-up.

The Player of Games

Against a Dark Background

The Urth of the New Sun