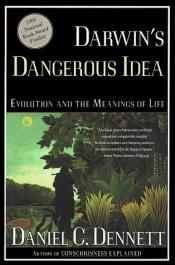 Darwin's Dangerous Idea: Evolution and the Meanings of Life is a 1995 book by Daniel Dennett, which looks at some of the repercussions of Darwinian theory. The crux of the argument is that, whether or not Darwin's theories are overturned, there is no going back from the dangerous idea that design might not need a designer. Dennett makes this case on the basis that natural selection is a blind process, which is nevertheless sufficiently powerful to explain the evolution of life. Darwin's discovery was that the generation of life worked algorithmically, that processes behind it work in such a way that given these processes the results that they tend toward must be so.
Dennett says, for example, that by claiming that minds cannot be reduced to purely algorithmic processes, many of his eminent contemporaries are claiming that miracles can occur. These assertions have generated a great deal of debate and discussion in the general public. The book was a finalist for the 1995 National Book Award in non-fiction and the 1996 Pulitzer Prize for General Non-Fiction.

The origins of life