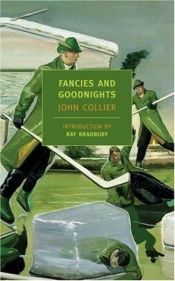 Fancies and Goodnights is a collection of fantasy short stories by John Collier, first published by Doubleday Books in hardcover in 1951. A paperback edition followed from Bantam Books in 1953, and it has been repeatedly reprinted over more than five decades, most recently in the New York Review Books Classics line, with an introduction by Ray Bradbury. A truncated British edition, omitting roughly one-quarter of the stories, was published under the title Of Demons and Darkness.
The collection is viewed as a classic of its genre. It won the International Fantasy Award for fiction in 1952, as well as an Edgar Award for "outstanding contribution to the mystery short story." It compiles most of the stories from Collier's prior collections as well as seventeen previously uncollected stories, several original to the volume. Collier reportedly rewrote many of his early stories prior to book publication.

The Road to Mars

"Doctor Who", The Deviant Strain (Doctor Who S.)