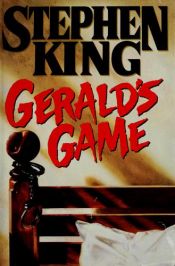 Gerald's Game is a 1992 horror novel by Stephen King. The story is about a woman who accidentally kills her husband while she is handcuffed to the bed as part of a bondage game, and, following the subsequent realization that she is trapped with little hope of rescue, begins to let the voices inside her head take over.
The book is dedicated to King's wife Tabitha and her sisters: "This book is dedicated, with love and admiration, to six good women: Margaret Spruce Morehouse, Catherine Spruce Graves, Stephanie Spruce Leonard, Anne Spruce Labree, Tabitha Spruce King, Marcella Spruce."