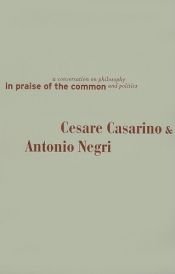 In Praise of the Common: A Conversation on Philosophy and Politics

A publishing event - the history and evolution of Antonio Negri's philosophical and political thought. A leading Marxist political philosopher and intellectual firebrand, Antonio Negri has inspired anti-empire movements around the world through his writings and personal example. In Praise of the Common, which began as a conversation between Negri and literary critic Cesare Casarino, is the most complete review of the philosopher's work ever
published. It includes five exchanges in which the two intellectuals discuss Negri's evolution as a thinker from 1950 to the present, detailing for the first time the genealogy of his concepts.

Reagan's War: The Epic Story of His Forty-Year Stru …