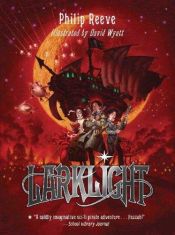 Larklight, or the Revenge of the White Spiders! or to Saturn's Rings and Back! is a young adult novel by author Philip Reeve. Illustrated by David Wyatt, it is the first book in the Larklight Trilogy.
Larklight is a space opera set in an alternate Victorian era, in which mankind has been exploring the solar system for at least a century, and wherein most of the planets are inhabitable. Protagonist Art Mumby narrates an attack on the British Empire and the solar system at large by an ancient, arachnid-like extraterrestrial race, against which he and his family play a central role, aided by the pirate Jack Havock and his crew.