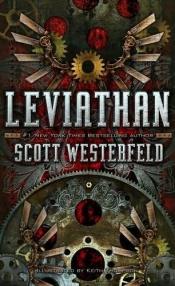 Leviathan is a biopunk/steampunk novel written by Scott Westerfeld and illustrated by Keith Thompson. It was released on October 6, 2009.
First of a young adult fiction trilogy set in alternative version of World War I, it has Central Powers using mechanized war machines opposed by Entente Powers who fabricate living creatures genetically. The heroes are teens Aleksander, son of Archduke Franz Ferdinand, and Deryn, Scottish girl with dreams of joining the British Air Service with her brother. The sequels are Behemoth and Goliath. The first two chapters of this book were released with Bogus to Bubbly: Insider's Guide to the World of Uglies.
The book was named the Best Young Adult Novel by the Aurealis Award in 2009, Locus in 2010, and Mir Fantastiki in 2011.

The Alchemy of Stone