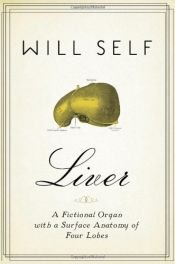 Liver: A Fictional Organ with a Surface Anatomy of Four Lobes

Short story by Will Self

Liver: A Fictional Organ with a Surface Anatomy of Four Lobes is the seventh collection of short stories by Will Self. The stories in the collection are all connected to the liver and was described by the author as "...a collection of two novellas and two longer short stories, all on a liverish theme. Each story features different people suffering from different forms of liver damage." Time Out was one of the first publications to review it and said...
"This inspired collection of four stories uses the liver as framework and controlling metaphor – there’s a tale for each lobe – but is less interested in the organ as a metabolic regulator than in what happens when it’s damaged beyond repair. At this point, Self’s gift for bilious satire kicks in, its target largely the ‘slapstick of addiction’ – for which the reformed junky has witheringly little time...Self has all the fun you’d expect with this, and the result is satire so vicious it makes Charlie Brooker look restrained."

Dr. Mukti and Other Tales of Woe

Natasha and Other Stories

The Quantity Theory of Insanity

The Most Beautiful Woman in Town

The Facts Behind the Helsinki Roccamatios