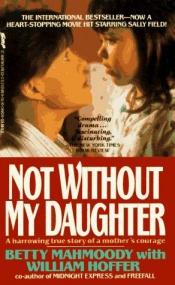 Not without my daughter

Not Without My Daughter is a biographical book by Betty Mahmoody detailing the escape of Betty and her daughter, Mahtob, from Betty’s abusive husband.
In 1977, Betty married Dr. Sayyed “Moody” Bozorg Mahmoody. In 1984, when their daughter was five, Betty reluctantly agreed to accompany her husband on a two-week vacation to Iran in order for his family to meet Mahtob. However, at the end of the two weeks, Moody decided that he and his wife and daughter should remain in Iran. Being a woman and an American in a nation where the former was despised and the latter was hated, Betty was trapped in Iran and could not return to the United States. The rest of Not Without My Daughter recounts Betty and Mohtob’s escape from Iran and return to the United States.
While the story is true, Betty needed to change certain aspects of the story in order to protect those who aided her and her daughter in their escape. She writes the following:
This is a true story.
The characters are authentic, the events real.

Princess: A True Story of Life Behind the Veil in S …

Do They Hear You When You Cry?

My Forbidden Face: Growing Up under the Taliban

The Story of My Life

Yellow Wallpaper" and Other Writings