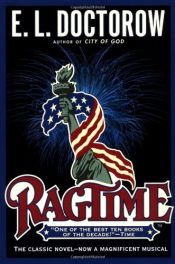 Ragtime is a novel by E. L. Doctorow, published in 1975. This work of historical fiction is mainly set in the New York City area from 1902 until 1912, with brief scenes towards the end describing the United States entry into World War I in 1917. A unique adaptation of the historical narrative genre with a subversive 1970's slant, the novel blends fictional and historical figures into a framework that revolves around events, characters and ideas important in American history.
In 1998, the Modern Library ranked Ragtime number 86 on its list of the 100 best English-language novels of the 20th century. Time magazine included the novel in its TIME 100 Best English-Language Novels from 1923 to 2005.

The Mysterious Flame of Queen Loana