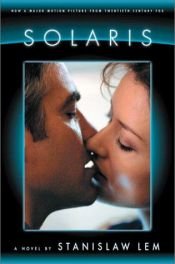 Solaris is a 1961 Polish science fiction novel by Stanisław Lem. It is about the ultimate inadequacy of communication between human and non-human species.
In probing and examining the oceanic surface of the planet Solaris from a hovering research station the human scientists are, in turn, being studied by the sentient planet itself, which probes for and examines the thoughts of the human beings who are analyzing it. Solaris has the ability to manifest their secret, guilty concerns in human form, for each scientist to personally confront.
Solaris is one of Lem’s philosophic explorations of man’s anthropomorphic limitations. First published in Warsaw in 1961, the 1970 Polish-to-French-to-English translation of Solaris is the best-known of Lem's English-translated works.