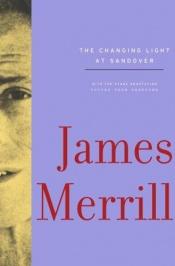 "The Changing Light at Sandover" is a 560-page epic poem by James Merrill. Sometimes described as a postmodern apocalyptic epic, the poem was published in three volumes from 1976 to 1980, and as one volume "with a new coda" by Atheneum in 1982.
Already established in the 1970s among the finest lyric poets of his generation, Merrill made a surprising detour by incorporating extensive occult messages into his work. With his partner David Jackson, Merrill spent more than 20 years transcribing supernatural communications during séances using a ouija board.
Merrill published his first ouija board narrative cycle in 1976, with a poem for each of the letters A through Z, calling it The Book of Ephraim. It appeared in the collection Divine Comedies, which won the Pulitzer Prize for Poetry in 1977.
At the time he believed he had exhausted the inspiration provided by the ouija board. The "spirits", he believed, thought otherwise, however, "ordering" Merrill to write and publish further installments, Mirabell: Books of Number in 1978 and Scripts for the Pageant in 1980.

An Atlas of the Difficult World