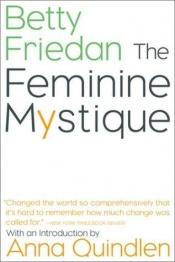 The Feminine Mystique is a 1963 book by Betty Friedan which is widely credited with sparking the beginning of second-wave feminism in the United States.
In 1957, Friedan was asked to conduct a survey of her former Smith College classmates for their 15th anniversary reunion; the results, in which she found that many of them were unhappy with their lives as housewives, prompted her to begin research for The Feminine Mystique, conducting interviews with other suburban housewives, as well as researching psychology, media, and advertising. She originally intended to publish an article on the topic, not a book, but no magazine would publish her article.

Self-Made Man: One Woman's Year Disguised as a Man