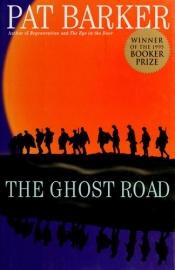 The Ghost Road is a war novel by Pat Barker, first published in 1995 and winner of the Booker Prize. It is the third volume of a trilogy that follows the fortunes of shell-shocked British army officers towards the end of the First World War. The other books in the trilogy are Regeneration and The Eye in the Door.
The war poet Siegfried Sassoon, who appears as a major character in the first book, Regeneration, is relegated to a minor role in this final volume, in which the main players are the fictional working-class officer, Billy Prior, and the real-life psychoanalyst, William Rivers. Thus Barker explores possible relationships between real people and fictional characters.